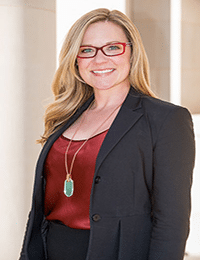 Attorney Morgan E. Leigh joined Scrofano Law PC in 2020 to head up the Firm’s Maryland Practice Area. She comes to the firm with a wealth of experience trying criminal cases in the District of Columbia and State courts in Montgomery and Prince George’s County, Maryland. After finishing law school, Ms. Leigh worked as an Assistant Public Defender in Montgomery County where she litigated thousands of cases on behalf of indigent defendants. Her experience as a public defender helped her learn and navigate the ins and outs of the Maryland criminal justice system.

After three years at the Office of the Public Defender of Maryland, Ms. Leigh took her knowledge and trial experience and opened her own law practice. For the next five years, she litigated cases in both the District of Columbia and Maryland. She also served as counsel for the Montgomery County Fraternal Order of the Police where she represented police officers charged with misconduct and/or criminal offenses. Attorney Leigh is an extremely aggressive and experienced trial attorney who fights tirelessly on behalf of her clients.

Attorney Leigh has handled all types of criminal matters from simple traffic offenses to DUI cases and violent felonies. At Scrofano Law PC, she specializes in defending individuals arrested in Maryland with a focus on Montgomery County and Prince George’s County and their surrounding areas. She handles a variety of matters including assault, domestic violence, drug and gun cases, prostitution and solicitation, reckless driving and endangerment as well as other violent felonies.

As an experienced DUI attorney, Ms. Leigh has been certified to administer the Standardized Field Sobriety Tests—the same course and certification Maryland DUI officers take. She spent her career focusing on improving her trial and litigation skills by attending trainings and conferences. She is active in a number of national criminal defense associations including the National Association of Criminal Defense Lawyers (“NACDL”), the National College of DUI Defense (“NCDD”), the DUI Defense Lawyers Association (“DUIDLA”), and the Maryland Criminal Defense Attorney Association (“MCDAA”).  She is also active in the state and local Bar Associations in Maryland, including the Montgomery County Bar Association and the Maryland State Bar Association. She is licensed to practice in both the District of Columbia and Maryland.

In her spare time, Attorney Leigh loves to travel, has a passion for hiking, and living life to its fullest. In 2019, she hiked the Machu Picchu trail, which involved 4 days of hiking and camping through difficult weather and terrain on the ancient Inca Trail for 27 miles. Known by a former client as a “small package of dynamite,” Attorney Leigh will fight vigorously on your behalf. She is a smart, dedicated advocate with the right experience to take on any criminal case.