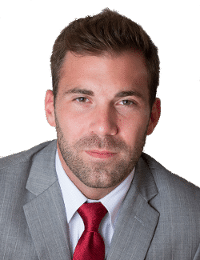 Attorney Joseph A. Scrofano is a passionate trial lawyer who will aggressively fight for your rights in a DC criminal case. Mr. Scrofano has litigated more than 300 cases in the District of Columbia Superior Court. Referred to affectionately by his colleagues as “Scruff Justice,” he has a reputation as a forceful advocate who fights harder than other more conventional criminal defense lawyers. He has gone so far as to subpoena an individual prosecutor and file for contempt against another to protect his clients’ rights.

Former clients have described Mr. Scrofano as “tireless in helping me with my DUI case,” “nothing short of amazing,” “kind, considerate, very trustworthy” who “keeps you in the loop every single step of the way,” and a “bulldog that’s not afraid to get into a fight.”

Mr. Scrofano’s relentless advocacy can make the difference between jail and probation, conviction and dismissal, or guilty and not guilty.

Mr. Scrofano has been selected as a Rising Star by Super Lawyer’s Magazine—a prestigious, patented attorney rating service through Thompson Reuters for the last three years (2015-2017). He has been named to the Top 40 under 40 by both the National Trial Lawyers and the American Society of Legal Advocates. He has achieved the highest peer review rating with Martindale Hubbell as “AV-Preeminent”–scoring a perfect score of 5.0/5.0. As a founding member of the DUI Defense Lawyer’s Association, he is on the cutting edge of challenging DC DUI’s with aggressive tactics, smart instincts, and sound judgment. He has a perfect 10 of 10 rating with AVVO and won the 2014 Client’s Choice Award. In addition, Mr. Scrofano obtained certification through the National Highway & Traffic Safety Administration to perform the Standardized Field Sobriety Tests–the same training officers receive to make DUI arrests.

Meet Joseph A. Scrofano from ReelLawyers on Vimeo.

Mr. Scrofano is an active member of the District of Columbia Bar Association. In 2016, Mr. Scrofano was elected to the Steering Committee for the DC Bar Criminal Law and Individual Rights Section. In 2017, he was selected by his colleagues as Committee Chair. He is also a member of the National Association of Criminal Defense Lawyers, the National Organization for the Reform of Marijuana Laws, and an Associate Fellow of the Litigation Counsel of America.

The training at Trial Lawyer’s College strengthened Mr. Scrofano’s deep commitment to client-centered advocacy. In 2010, with a little experience but a large desire to fight for individual rights, Mr. Scrofano took a chance in a tough economy and laid the first brick of Scrofano Law. He started out representing indigent defendants on the Criminal Justice Act Panel where he gained a reputation as a tireless advocate. He went above and beyond to get the best results for every client—putting in countless hours on behalf of folks often ill-treated and marginalized in society—regardless of fee. Whether it was a possession of an open container of alcohol or murder charge, Mr. Scrofano put everything he had into fighting for his clients. Since that time, he has built one of the top criminal defense practices in the District of Columbia.

Before starting Scrofano Law, Mr. Scrofano spent two years clerking for the Honorable Natalia Combs Greene in D.C. Superior Court. Judge Combs Greene had served as the Director of Training at the United States Attorney’s Office for the District of Columbia prior to her appointment to the bench by President Clinton. Judge Combs Greene taught Mr. Scrofano invaluable lessons on trial skills and his experience gave him incredible insight on how judges make decisions. During his Clerkship, Mr. Scrofano worked on hundreds of civil and criminal cases, including substantial work on an opinion published by the Daily Washington Law Reporter referred to as “one of the most well-written, thoroughly-reasoned, erudite, impartial, and comprehensive Memorandum Opinions ever to come out of the D.C. Superior Court.”