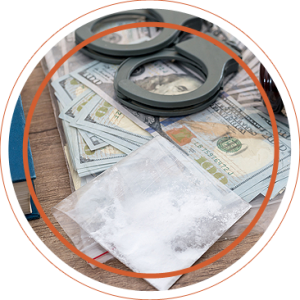 That said, one can end up incarcerated in DC for drug crimes. Under the District of Columbia code, there are three basic types of drug offenses: possession, possession with the intent to distribute, and distribution. Simple possession of drugs for personal use for most illegal narcotics is a misdemeanor that carries a maximum penalty of 180 days in jail and/or a$1,000.00 fine.

Possession of a Controlled Substance

For simple drug possession cases, the government will often agree to diversion, which can include some combination of community service, drug treatment, or both. Diversion allows criminal defendants to resolve cases short of taking a plea or going to trial. The government requires the defendant to complete conditions and if the defendant complies, the government will dismiss the case. D.C. Superior Court also has a specialized court for some eligible defendants called drug court that allows for successful drug treatment to lead to getting the charges dismissed.

However, possession of PCP in DC is treated more seriously than other types of drugs. The DC City Council passed a law that made possession of PCP in its liquid form a felony. Many PCP users dip cigarettes or joints into the liquid and sell the cigarettes individually. Accordingly, the law assumes if someone has it in liquid form then that person intended to sell it. However, for other illegal drugs like cocaine, heroin, amphetamines, etc., to charge someone with a felony, simple possession is not enough.

Marijuana Legalization from ReelLawyers on Vimeo.

Possession with Intent to Distribute

Possession with intent to distribute is a felony in the District of Columbia. Possession with intent to distribute is exactly what its described as: possession illegal drugs with the intent to sell or give them away. Accordingly, to prosecute someone for that crime, the government needs what is called “indicia of sale” to demonstrate the drug possessor’s mindset is beyond just wanting to use the drugs. Some examples of indicia of sale include (1) large quantities of the drug; (2) possessing a large amount of cash upon arrest; (3) possessing paraphernalia used for packaging and weighing narcotic; and (4) statements or actions demonstrating an intent to sell. Finally, the law does not distinguish whether you sell or give away the drugs for free. Both scenarios are considered “distribution.”

Distribution of a Controlled substance

Finally, and the most serious drug offense, is distribution of a controlled substance. For distribution, the police must actually witness or catch the person in the act of selling or distributing the drug. These cases typically involve an undercover officer making a purchase from a suspected drug dealer and then making the arrest.

Given recent changes in marijuana law in the District of Columbia, if the substance is marijuana, the rules are different. Marijuana remains illegal under federal law. However, the District of Columbia has legalized possession of a certain quantity for individuals in the city. Accordingly, the DC crime of possession of marijuana no longer exists. However, it does under federal law. And it is still illegal to sell marijuana in DC and to smoke it in public under DC law. However, under DC law it is not illegal to give small quantities of it away for free. That creates a confusing legal environment for District residents but unfortunately until greater acceptance of marijuana possession occurs on the federal level, that is just the way it is.

The law in the District of Columbia defines possession in two types of ways. First, “actual possession” occurs under the law when an individual has actual physical possession of the drugs. The most common example is the drugs being found in an individual’s pocket or in a backpack they are carrying. However, not all scenarios fall in this category of possession. What happens is police search a vehicle and find drugs in the backseat and three people are in the car? How do the police determine who the drugs belong to? This situation may also occur where the driver gets arrested for DUI and the police also find drugs in the car.

A similar situation occurs when policy execute a search warrant in a residence where multiple live or are present during the search. When these types of situations occur, the government proceeds on a theory of “constructive possession.” Under a theory of constructive possession, the government must prove that (1) the defendant knew about the drugs; and (2) the defendant had the ability to exercise control over them.

To prove constructive possession, the government will look to various types of evidence. For example, did the defendant or other witnesses make statements that tend to show ownership of the contraband. If the items are found in plain view, then the government can usually argue that the defendant at least had knowledge of the contraband. If forensic evidence exists like fingerprints or DNA on the contraband that match the defendant. That is usually powerful evidence of constructive possession because the government can point to the defendant exercising control over the drugs by showing the defendant touched them at least one time. Another type of evidence is having exclusive or limited access to where the drugs are found. For example, suppose police searched a residence and found drugs in a lock box. Then they search the resident of the property and find a key to the same lock bock in that person’s pocket. That would constitute powerful evidence of knowledge and intent to control the drugs.

Drug offenses in the District of Columbia are serious. Whether charged with a misdemeanor or felony, conviction can carry jail time, probation, and/or fines. In addition, the stigma of having a conviction on your record can often lead to collateral consequences for your future. Accordingly, its extremely important to consult with a DC drug attorney who can fight to protect your rights and advise you of the best course of action to take in your case.

If you or a friend or loved one has been arrested for a DC drug crime or simply has questions about DC marijuana laws, contact Scrofano Law PC for a full consultation. We are experienced, aggressive drug defense lawyers and here to help.